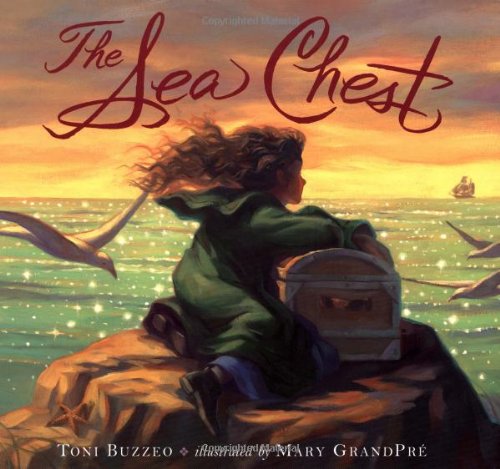 While waiting for a "stranger," a girl snuggles with her great-great-aunt, looking at a photo of a small child "touched so often with hope, the edges curl." This intriguing beginning launches a touching story-within-a-story. Auntie Maita describes her loneliness as the only child of a Maine lighthouse keeper. One morning, after a fierce storm, Maita and her father find a sea chest wrapped in mattresses. Inside, they find a baby and this sorrowful note: "We commit this child into the hands of God. May He save her." Basing her plot on a local legend, Buzzeo, a Maine school librarian making her picture book debut, writes with such vivid, sensory-rich language that readers are almost certain to feel Maita's yearning for companionship and, later, her joy at having a sister. GrandPré's (illustrator of the Harry Potter books) oil paintings, too, communicate the characters' shifting moods. During the storm, Mama and Maita peer through the window at Papa as he lurches against the wind toward the lighthouse. In a shadowy, sea-like, blue-green room, their candlelit faces exude a deep but stoically controlled fear. Back in the present, the girl looks expectantly at the quilt-lined sea chest, which "waits open on the table, for the tiny stranger my mama and papa have gone to fetch from so far across the wide Atlantic. To be my sister." Poignant, poetic and movingly illustrated, this story resonates with sisterly love. Ages 5-up.