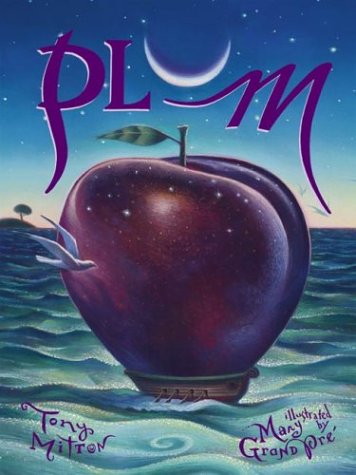 Mitton () makes his foray into poetry with this uneven collection of 20 verses. Beginning with the tangible (the first poem, "Plum," opens, "Don't be so glum, plum./ Don't feel beaten./ You were made to be eaten"), he proceeds to more abstract themes, ending with "Instructions for Growing Poetry" ("Does it please you?/ Does it tease you?/ Does it ask/ to grow and spread?/ Now those little/ words are sprouting/ poetry/ inside your head"). GrandPré's (Harry Potter series; ) pastels, rendered in a predominantly dark and chilly palette, emphasize an underlying anxiety in many of the poems. For "Plum," she envisions the speaker as a bird of prey, precariously perched on a windowsill high above the sea. A coiled snake that not only sits in a tree but that seems to form the tree itself overtakes the spread for "The Snake and the Apple"; the menacing mood seems unwarranted by the poem, which focuses on the taste of the apple rather than the forbidden knowledge it imparts. The highlight might be "The Minstrel and the Maid," in which verse and illustrations work together to demonstrate the flirtation between the two subjects, each beckoning from one side of the spread. The minstrel's music ("I'll breathe you an air/ on a flute of gold") swirls like a thread of steam to where the maid holds a pie as an offering; the roses on her skirt echo his poodle's curls and the ornamentation of his music stand. But, as in the gratuitous gatefold illustration of pink and purple pachyderms clowning in "Elegant Elephant Delicatessen," many of the visual interpretations seem superficial. Ages 5-12.