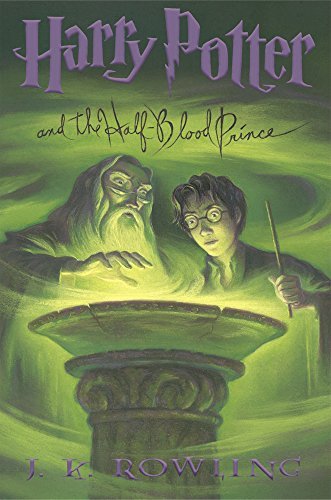 Rowling's sixth book opens in the British Prime Minister's office after "a very long, tiring, and difficult week," words that cast an eerie light on actual events in London this summer. Yet from the first, the author has used the wizard world to offer insight into the goings-on in the real world, perhaps now more than ever. After the new Minister of Magic introduces himself to the Prime Minister, the scene shifts to Professor Snape's home, where Draco Malfoy's mother and aunt pay him a call, referring to a cryptic mission on which He-Who-Must-Not-Be-Named is sending Draco. Next, Dumbledore himself fetches Harry from the Dursleys, as the two begin a book-long quest to get to the heart of the dark wizardry impacting both the Muggle and magical worlds. Although You-Know-Who makes no appearances here, his henchmen gain momentum, and his past comes to light through multiple trips via the Pensieve; perhaps Rowling's most brilliant invention yet, the Horcrux, comes chillingly to the fore. Meanwhile, after winding up with a used copy of with notes from a mysterious Half-Blood Prince, Harry aces his Potions class, taught by the new Professor Slughorn; Snape is now teaching Defense Against the Dark Arts—what can that mean? Readers will have to madly flip the pages to find out. Rowling spends a fair amount of time in the set-up but she accomplishes a great deal in this book, pulling together threads from all the previous titles and expertly poising readers for the planned finale. Old friends such as Lupin and Dobbin make reappearances, love interests and subsequent tensions unfold. Harry, now restored to popularity, nonetheless finds Ron and Hermione wary of his new obsession with Draco Malfoy's activities. The situation at Hogwarts mirrors world events: even Dumbledore finds it difficult to distinguish the good from those who would unleash terror at the school and society at large. If Harry grew up in the last book, here he becomes a man, learning the true impact of the last book's prophecy, and the importance of love as the antidote to fear. All ages.