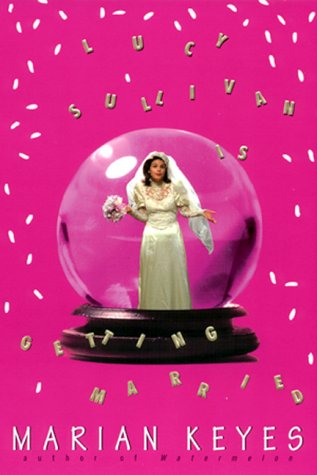 Lucy Sullivan Is Getting Married

Lucy Sullivan, the eponymous heroine of Irish writer Keyes's second offbeat romantic comedy to be published in the U.S. (after Watermelon), fancies herself simultaneously miserable and happy. A 26-year-old Londoner, Lucy is the kind of woman who thinks that any man who's decent to her must be Mr. Wrong. But when she visits a fortune-teller with a trio of mismatched friends, a marriage is predicted for the near future. When the fortune-teller's prophecies for the other three come true in peculiar ways, even disbelieving, boyfriendless Lucy begins to suspect that, somehow, wedding bells will ring for her. The identity of the lucky man will come as no surprise, though Lucy remains oblivious until the very end, but there are many eligible bachelors on the scene, among them Gus, Lucy's sexy but unreliable new lover; Daniel, her oldest friend; Chuck, a handsome American; and Adrian, the video shop man. The attendant mayhem includes drunken meals at ethnic restaurants, flamenco dancing accidents, blind dates gone wrong and many delicious confessions and revelations. As Lucy says, ""I was still at that stage in my life when I thought that weekdays were for recovering from the weekend,"" but more often than not, her weekdays are as full of exhausting fun as her weekends. Surprisingly for a comic novel, the book also takes on the serious themes of clinical depression and alcoholism, handling both with sensitivity and humor. Throughout, the effervescent narrative is fueled by witty repartee; though its outcome may be predictable, its sentiments are heartfelt, and its progress is sprightly. Fans of Bridget Jones will be delighted. Agent, Russell Galen of Scovil Chichak Galen. (Aug.) FYI: Touchstone Pictures has optioned the rights to Keyes's novel, Rachel's Holiday.
close
Details