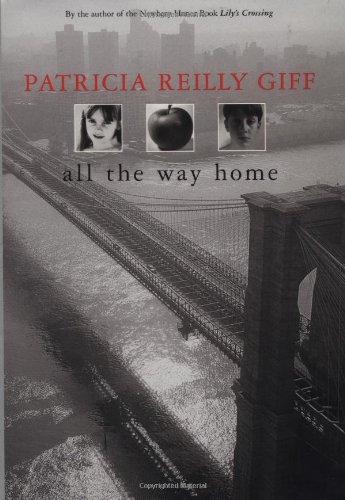 ALL THE WAY HOME

Newbery Honor novelist Giff () brings together two appealing young characters in this story of friendship, family and finding where one belongs. When fire destroys the apple crop on his family's upstate New York farm in 1941, Brick's parents must find work elsewhere and send their son to live temporarily in Brooklyn with Loretta, an old friend. Loretta, a nurse, years before adopted a young polio victim, Mariel, whom she had cared for in a hospital located near Brick's family's farm. Though she loves Loretta, the girl is determined to find her birth mother, of whom she has faint memories. Mariel is drawn to the likable Brick, yet initially her embarrassment at her polio-scarred legs (which, in her mind, "curved like the pretzels in Jordan's candy store") prevents her from talking to him. But when he shares his resolve to return home to help a beloved elderly neighbor harvest his apple crop, Mariel encourages him to make the journey. Impulsively, she decides to accompany him and to visit the hospital where she was taken when stricken with polio, hoping to find clues to her mother's identity. The pieces of the plot snap together a bit too easily and snugly as Giff solves each youngster's dilemma. More credible is the emotion that runs high—and affectingly—throughout the narrative, as well as the many period details. Ages 8-12.