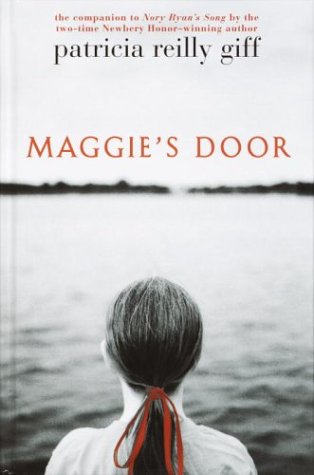 Beginning where left off, this harrowing survival tale follows the journeys of Nory and her friend Sean. Alternate chapters tell two separate but equally grim accounts of hardships and loss, as the children travel on foot to a ship bound for America. Sean, waylaid by an errand (with the promise of food as repayment), loses sight of his traveling companions, his mother and Nory's younger brother, Patch. Without a ticket to board the , he must find another way to gain passage. Meanwhile, Nory, who trails far behind her loved ones, is further delayed when she injures her foot and is robbed by a desperate child. Despite its grittiness, the novel succeeds in evoking a sense of hope as characters rely on their resourcefulness both to stay alive and to reach their destination. Giff strategically places strokes of good fortune so that readers are never submerged into bleak depths for too long a period. The thief who steals Nory's food, for instance, also provides her with a much-needed walking stick; Sean lands a job as cook's assistant on the . Although the tedious walk to the ship may seem to readers nearly as long as the 40-day trip across the Atlantic, the book consistently expresses the children's strength and courage—which eventually leads them to one another and, later, to Maggie's door in Brooklyn. The protagonists' arrival in New York marks a new chapter in their life, hinting that another sequel may be in the works. Ages 8-12.