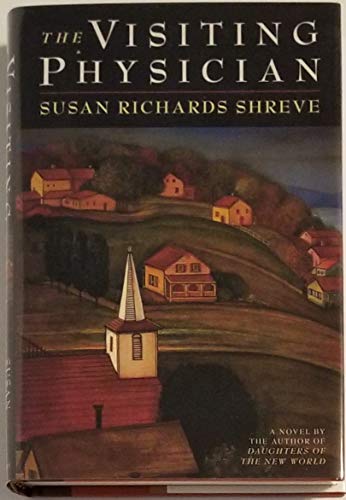 Three events have occurred before pediatric resident Dr. Helen Fielding, the protagonist of Shreve's latest novel (after The Train Home) comes to Meridian, Ohio, as a ""visiting physician,'' filling in for the town's only doctor, who has left under a cloud. First, CBS filmed a TV documentary called The Story of Meridian, depicting the small, isolated town as brimming with unusual community spirit. Soon afterwards, a four-year-old girl disappeared. Then, after the river flooded, a mysterious virus began killing children. Helen is fleeing a flat love affair, because she is emotionally blocked, ""her nerve center... in cold storage.'' When she arrives in June, she does not tell the citizens of Meridian that her family summered there or that, 25 years ago, when she was four and her sister Emma two, the baby disappeared while in Helen's care. But everyone else in town has secrets, too, it appears, and just in case Helen and the reader miss that fact, the characters say so again and again. Helen learns that voluptuous Sophie DeLaurentis, who has an illegitimate daughter, is the disruptive Eve in this putative Eden; that the chief of police has a mystery in his past; and that the clinic nurse, a statuesque black woman called Prudential, knows everybody's secrets and has some of her own. Though Shreve keeps the tension mounting, subtlety is in short supply: melodramatic events turn out to be charades; the villain's evil deeds are telegraphed by frequent references to his excessive paleness and long, long arms. While Shreve remains an accomplished stylist, this novel about the difference between appearance and reality never seems real enough to be believed. (Apr.)
close
Details