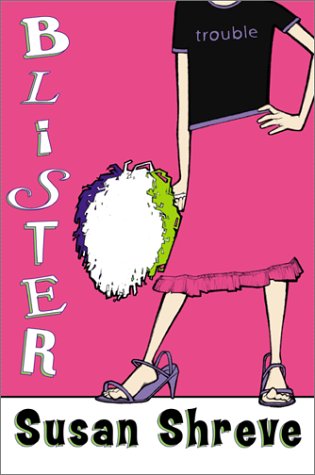 The feisty, remarkably resourceful girl who came to Jonah's aid in takes center stage in this heartrending novel. After Alyssa's sister is stillborn, her mother slips into a deep depression and her father moves the family from their farmhouse to a cramped apartment in North Haven, Conn. When her father later tells her that he is moving out of the apartment, the 10-year-old announces that she is replacing her given name with Blister, "Like when your shoes are too tight." At her new school, Blister "assume[s] a role of invented self-confidence," but fails to break into the fifth-grade cliques, despite reassuring her parents that she is making many new friends. On a weekend visit to her father's apartment, the child opens a suitcase stashed under his bed and discovers a cache of women's clothing and jewelry, some of which she takes with her when she leaves. How Blister uses these purloined items to seek revenge on her father and to impress her classmates enhances the poignancy of Shreve's narrative, which offers razor-sharp insight into the mind of this troubled yet resilient heroine. With a tightly woven plot and entirely convincing characters (Blister's supportive and eccentric grandmother is a standout), Shreve again proves herself an inspired and inspiring storyteller. Ages 8-12.