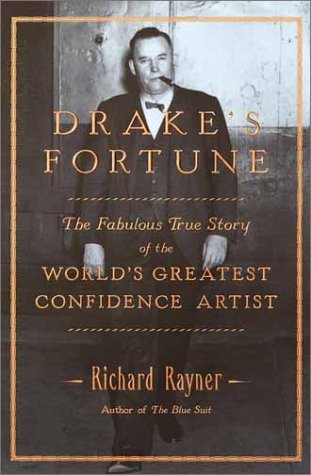 "The confidence man," Rayner suggests in this lively biography of rakish swindler Oscar Hartzell, "might in fact be the great covert, or not so covert, American hero." After stumbling more or less inadvertently onto a scheme involving the allegedly misappropriated fortune of Sir Francis Drake, Iowan Hartzell persuaded some 100,000 Midwesterners to part with millions of dollars—mostly during the Great Depression—to start a legal fund that would see the fortune restored to its rightful heir. In return for their contributions, donors would get "shares" in the fortune, estimated to be worth $100 billion. In fact, all the money went into Hartzell's pocket. He lived the high life in London for years, until Scotland Yard built enough of a case against him to have him deported back to Sioux City to stand trial for fraud. Despite his speedy conviction, the majority of those he'd fleeced remained convinced he was going to deliver their shares of Drake's fortune—and they continued to send him money. Described by prison psychiatrists as of below average intelligence, Hartzell was, Rayner suggests, nevertheless canny enough to exploit American fantasies about instant wealth and glory. Rayner's () account of Hartzell's life and times is brisk and breezy, a terrifically entertaining read, and the author's obvious fascination with his subject is infectious. But this is more than just a gripping tale: Rayner also laces his narrative with savvy commentary—including insights into the psyches of swindler and victim alike—that helps explain why cons like Hartzell occupy such a place in American history.