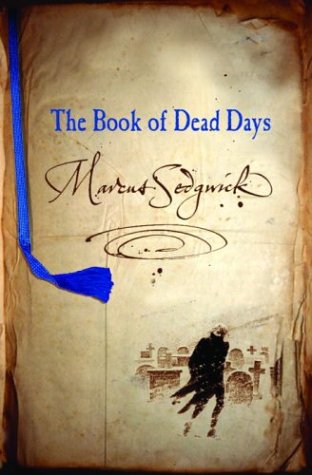 THE BOOK OF DEAD DAYS

The characters in Sedgwick's ( ) gothic chiller lurk in darkened theaters, alleyways and graveyards. The novel centers around a charlatan who years ago made a deal with a devil—and whose time is almost up. Valerian runs the magic show in the Great Theater, along with his assistant, an orphan he calls Boy, useful chiefly "because of his expertise at squeezing into ridiculously small spaces," to help with the magical illusions. As the unspecified year ("somewhere in the second half of the eighteenth century" writes the author in his introduction) draws to a close, violence begins to erupt—the owner of the theater is killed in gruesome fashion, and slowly Boy learns that Valerian is hiding a dark secret and evading a hellhound on his trail. The man's wisdom and magical prowess, it turns out, were bequeathed 15 years ago in a deal for his soul, a deal which is about to come due, during the "dead days" of the title (the stretch between Christmas and New Year's). The leisurely setup immerses readers in the delectably eerie surroundings (the book is two-thirds finished before Valerian begins to spill some of his secrets); those eager for action may grow impatient. But Sedgwick's atmosphere is so well rendered, the fog on the cobblestone streets so tangibly thick, that most will likely get caught up in this exotic era and its creepy characters. Ages 10-up.