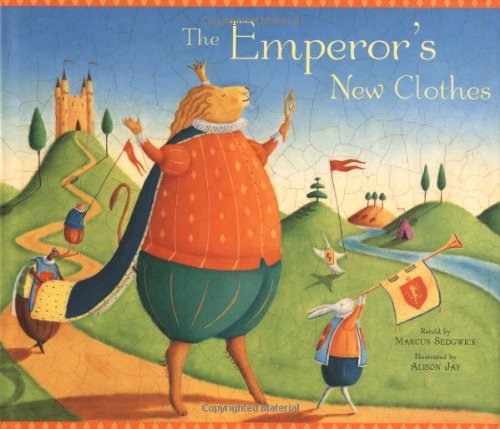 Sedgwick's ( ) jaunty rhymed couplets and Jay's ( ) signature stylized artwork ably accentuate the wry humor of this Hans Christian Andersen tale. The author emphasizes the breezy cadence of the verse by sprinkling it with exclamation points and presenting some of the words in larger type sizes for emphasis. When the monarch contemplates checking up on the deceitful tailors' progress, for instance, he thinks, "Suppose, when I visit, I can't see a thing./ Then I'd look like a / and I am the !"; both "fool" and "king" appear in larger font sizes for aid in reading aloud. Jay's pictures, at once classic and edgy, bring into humorous focus this imperial household of cleverly cast animals: the vain emperor is a lion, his scurrying servants (sent to check up on the tailors in the lion's stead) are a hare and a tortoise, and weasels assume the role of the scheming tailors. The elaborate, often intricately patterned courtly garb worn by the characters—most importantly the foppish emperor—renders the ruler's unclothed persona all the more comical. And her intermittently elongated and foreshortened perspectives emphasize the tale's moral. As the weasels gloat over their success at convincing the emperor to hire them to fashion magical clothes for him, they say of their ruse: "The story's a good one, woven with care./ And one that was told with a/ great deal of !" An apt description of this buoyant collaboration as well. Ages 4-8.