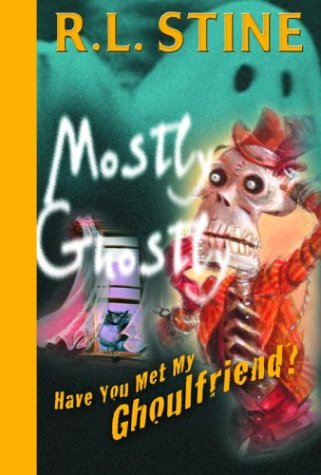 WHO LET THE GHOSTS OUT?

This rather inane tale launches Stine's attractively priced paper-over-board Mostly Ghostly series, starring 11-year-old Nicky and his younger sister, Tara, who, walking home one evening, realize they have no memory of where they are coming from—or of anything else. ("Why did I suddenly have a hole in my brain?" wonders Nicky.) Arriving at their house, the two discover another family is living there, including 11-year-old Max, an aspiring magician. As the story unfolds through Nicky and Max's first-person narration, the siblings realize that they are ghosts who fade in and out randomly, and enlist Max's help to discover their parents' whereabouts. Meanwhile, Phears, an ominous ghost who appears in the guise of various animals, begins haunting Max and insisting he lead him to his new ghostly pals. In a brief appearance to Nicky and Tara, their former housekeeper (now also a ghost) cryptically warns them about Phears, saying that he "knows about your mom and dad" and that he "let all the ghosts out." The fact that only Max can see and hear the ghostly youngsters creates some humorous, sitcom-esque moments, and Stine injects the occasional creepy scene that will bring on scattered goosebumps. But readers may feel cheated that the author leaves the plot dangling, "to be continued" in the series' second volume, , also due this month. Ages 7-10.