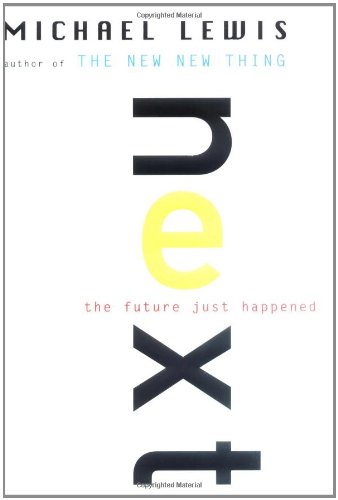 NEXT: The Future Just Happened

Putting an engaging and irreverent spin on yesterday's news, Lewis (; ) declares that power and prestige are up for grabs in this look at how the Internet has changed the way we live and work. Probing how Web-enabled players have exploited the fuzzy boundary between reality and perception, he visits three teenagers who have assumed startling roles: Jonathan Lebed, the 15-year-old New Jersey high school student who made headlines when he netted $800,000 as a day trader and became the youngest person ever accused of stock-market fraud by the SEC; Markus Arnold, the 15-year-old son of immigrants from Belize who edged out numerous seasoned lawyers to become the number three legal expert on AskMe.com; and Daniel Sheldon, a British 14-year-old ringleader in the music-file–sharing movement. Putting himself on the line, Lewis is freshest in his reportage, though he doesn't pierce the deeper cultural questions raised by the kids' behavior. As a financial reporter tracing the development of innovative industries like black box interactive television and interactive political polling from their beginnings as Internet brainstorms, Lewis reminds readers that the twin American instincts to democratize and commercialize intertwine on the Internet, and can only lead to new business. In the past, Lewis implies, industry insiders would simply have shut out eager upstarts, yet today insiders, like AOL Time Warner, allow themselves "to be attacked in order to later co-opt their most ferocious attackers and their best ideas."