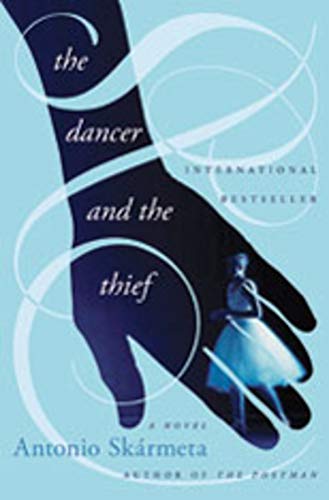 The Dancer and the Thief

Skármeta ( ) conjures in his impressive sixth book a contemporary Santiago, Chile, where the memory of Pinochet’s reign and the “disappearing” of citizens still looms. Presidential amnesty has granted freedom to some nonviolent criminals, releasing 20-year-old Ángel Santiago, a passionate young man imprisoned for impulsively stealing a wealthy rancher’s horse, and 60-year-old “Nico” Vergara Grey, a gentleman-thief who has repented his life of crime. Ángel plans a grand heist and some payback, butut Ángel’s heist is dependent on Nico, who wants only to be taken back by his estranged wife and son. Looming in the background is the warden who allowed inmates to rape and torture Ángel. Fearing (correctly) that Ángel will want revenge, the warden hires an assassin to kill him. Intertwined is Ángel’s meeting with Victoria Ponce, a ballet student who wants to compose a dance to commemorate her dead father, a resistance member murdered by Pinochet’s goons. Ángel helps Victoria move toward realizing her dream, and Nico eventually agrees to help with the heist, but with the assassin on his trail, Ángel may not be so lucky. Surprising jolts of humor flash throughout this powerful, humane novel.