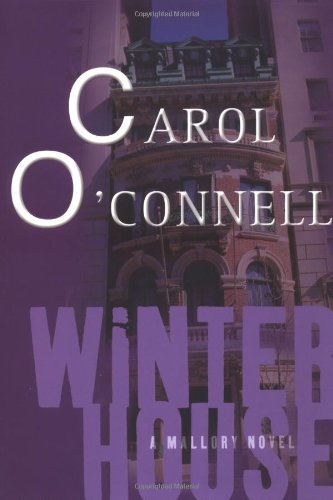 An ice pick is the murder weapon of choice in O'Connell's new noir featuring glacier-cool detective Kathy Mallory. A former homeless child-thief adopted by a kind-hearted New York cop, Mallory has parlayed her familiarity with the shady side of society into a successful—if somewhat unorthodox—career as a sleuth (she picks complex locks with aplomb and her investigative methods flirt with the limits of the law). When Nedda Winter, missing for 58 years following the massacre of her family at their New York mansion, reappears at the scene of the crime—now the site of a brand-new homicide—Mallory ("[s]till feral in many ways") digs her red lacquered nails right into the case. Cleo and Lionel Winter are mystified by their sister Nedda's return, certain they were the only survivors of the long-ago stabbing rampage. Mallory, working alongside sartorially challenged homicide detective Riker and psychologist Charles Butler, suspects the reason lies with Cleo's ex-husband, Sheldon Smyth, a slick estate lawyer with exclusive access to the Winter family's multimillion-dollar trust. But Smyth's dubious deeds are just the tip of the ice pick in the hands of O'Connell, known for her idiosyncratic characters and labyrinthine plots in eight previous thrillers including and . Vivid prose keeps the pages turning in this intricate tale of betrayal, buried secrets and lives chopped short in the name of greed.