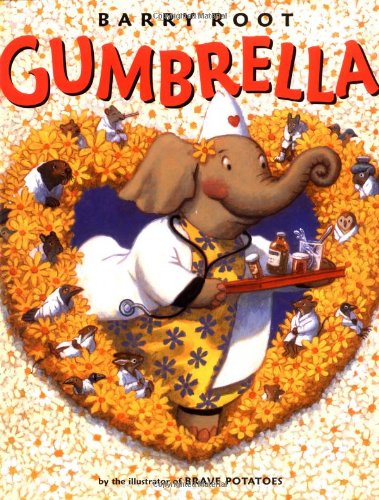 Gumbrella is a pachyderm with a purpose, and nothing's going to stop her. When Gumbrella's brother discovers an injured mouse in the forest, she opens an animal hospital, turns Trumbull, her cowed brother, into an ambulance and stocks her sick ward with "squirrels with sniffles, mice with measles, and moles with mumps." Acting as doctor, nurse and entertainment director, the industrious elephant cares for her charges even after they beg to leave ("Go home! What a ridiculous idea!" says Gumbrella). Young stuffed-animal doctors and nurses-in-training will be delighted by Root's () good-intentioned Florence Nightingale wannabe, wonderfully rendered in a cheerful, color-saturated palette. Root cleverly depicts Gumbrella's single-minded altruism with visual winks—in one spread, she dances Isadora Duncan–style for her patients—coupled with a sly voice ("The animals had seen better dancing, but they all sat through it and clapped politely"). The turnaround-is-fair-play ending will also appeal: when Gumbrella grows despondent after her charges escape, they nurse her back to happiness with the same overprotective zeal. The pampered patient's wide-eyed bliss on the last page is proof that helping others has its own rewards. Ages 4-8.