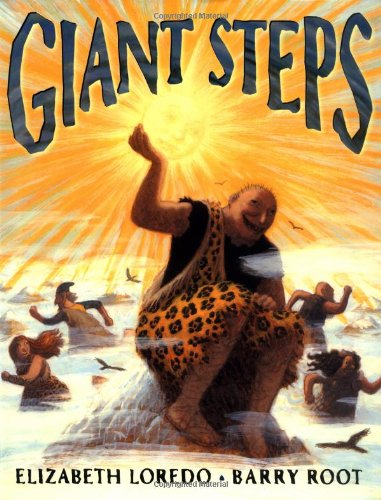 Inspired by the children's game of the same name, Loredo's ( ) folksy yet flimsy tale opens on a comically languid note: "Five loud-sighin' giants sittin' on a mountaintop./ Five eye-rollin' giants sittin' on a mountaintop./ Five yawny-bored giants sittin' on a mountaintop,/ all of them wonderin' what they should do." They "one potata, two potata, three potata, four..." to decide who is " ," a role that falls, as usual, to the fifth giant (who "never is lucky like the rest"). As that fellow slowly starts countin', the others take off runnin', one to the north, one to the south, and so on, all encountering diverse terrain and creatures (e.g., the westward bound giant—the only female—"run[s] out over red-stripe desert and yawn-mouth canyons/ and thirsty coyote howlin' at scaredy jackrabbits"). When the fifth giant yells " !" everyone complies ("They froze in the north," according to the story's wittiest line). After taking three giant steps, the fifth giant misses when he tries to hit one of his pals with a "great big golden ball"—the sun—and is again declared " ." The others are lucky, concludes the narrative, "on account of he's the only giant can ." Root's ( ) predominately earth-toned mixed-media art provides innovative perspectives of the giants' globe-trotting high jinks, and one or two of the outsize characters seem to have combined their snaggle-toothed giddiness with a quick sortie through a Wagner Ring Cycle wardrobe room. Ages 5-up.