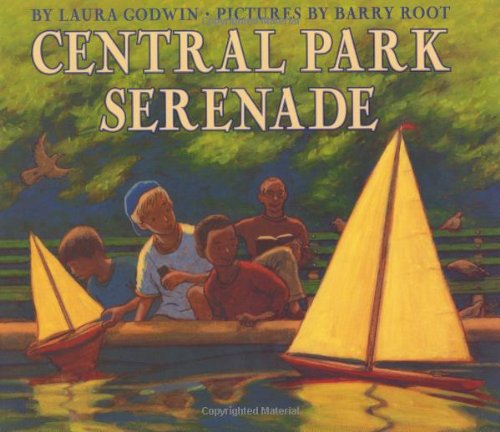 Central Park hums with activity in this convivial paean to a beloved refuge in the heart of Manhattan. In breezy rhymed couplets, Godwin () conveys the park's sounds and sights on a summer day (" An umpire's call./ Retorts the ball"). Verses that describe people's varied doings alternate with the refrain, "And the pigeons coo/ And the big dogs bark/ And the noises echo through the park." Root's () vibrantly hued, intentionally hazy paintings chronicle the goings-on described in the text—and then some. The spread for the title page offers readers a peek into the window of an apartment building, where a boy sleeps, a model sailboat hanging on the wall above his bed. On subsequent spreads, the boy (sailboat in hand) and his father leave their building and walk to the park, where they meet up with two young pals and sail their toy boats in the pond. The wordless subplot invites youngsters to follow its principal players while taking in the more encompassing portrait of the bustling park. Offering a melodic read-aloud, this aptly titled, buoyant book should please young city- and country-dwellers alike. Ages 3-5.