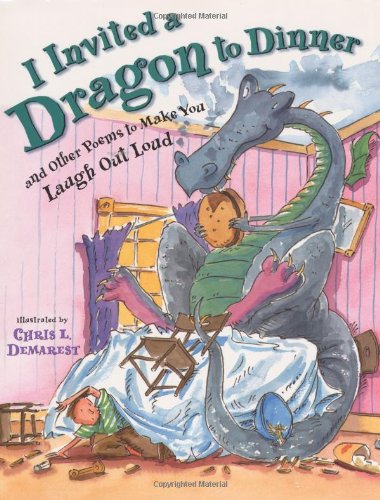 I INVITED A DRAGON TO DINNER: And Other Poems to Make You Laugh Out Loud

This collection showcases the work of 23 new poets who were chosen in a nationwide contest. Unfortunately, the rhythm in many of the poems sounds the same and the verses revisit well-trod themes such as wacky parents, improbable animals in inappropriate places and outlandish dietary requests. Demarest (), too, uncharacteristically uninspired, usually opts for the most literal interpretation of each verse. However, youngsters new to the genre will appreciate the silliness and puns, and some of the poems stand out, such as Dave Crawley's "The Attic": "There's a rumble in the attic./ A grumble in the attic./ I fear I hear (it's very clear)/ A stumble in the attic." Robert Ora Thomas offers the tale of the multitasking "Billy Bupper" who likes to combine eating and playing. The boy dresses by putting various sandwich fixings in his clothing, "So when Billy does a somersault/ He also makes his lunch." In the accompanying illustration, one of Demarest's strongest, an arc of food rises above both the catapulted boy and the words of the poem. And in Andrea Perry's cheekily sacrilegious "Bedtime Prayer," the narrator beseeches God to "Deliver me, Lord,…/ …/ From car sickness, blisters, and cold sores, and then,/ Don't forget liver and onions. Amen." An entertaining diversion. Ages 3-7.