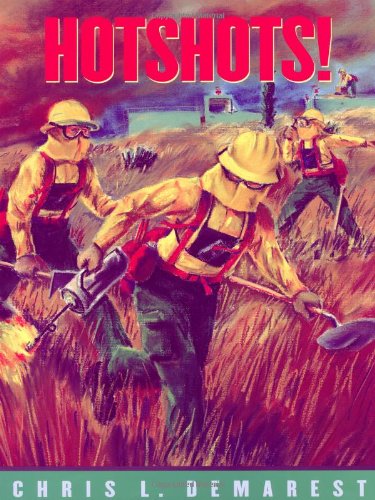 Demarest's passion for firefighting ignited two terrific books (; ); now he makes it three with this compellingly detailed salute to the highly specialized ground crews called "Hotshots." Following a fire from its inception (sparks from a train land in a dry field) to its defeat through a tactic called "backburning" (in which the hotshot crews actually set small fires intended to rob the oncoming inferno of more fuel), Demarest's journalistic framings and staccato couplets conjure all the drama and urgency of a breaking news report. "Police drive through streets, calling '/ For some people's homes, it is just much too late./ Chaparral explodes and jumps a side street./ A wood-shingled roof torches off from the heat." The pastel illustrations, ablaze in oranges and yellows, explode from the spreads with a sense of heat and growing danger as the hotshots work bravely and diligently to thwart the inferno's power. In a series of extraordinary spreads that form the book's climax, Demarest plunges readers into the thick of a hillside's 60-foot flames, which force the hotshots to hug the ground in tent-like "Shake 'n Bake" shelters as a wall of fire literally rolls over them. A brief but informative author's note concludes this exciting and invaluable companion to understanding wildfires and the heroes who battle them. Ages 5-8.