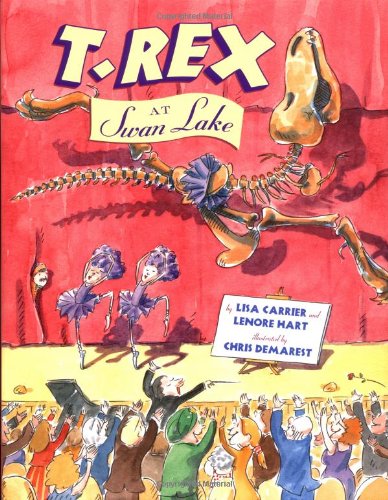 Two first-time authors team up for this oddball story about a dinosaur skeleton who escapes from a museum to star in a performance of . Like Godzilla in the city, T. Rex causes havoc—both on-stage and off. Most of the time the text feels labored—the voice is not consistent and the overlong text seems more complicated than the format allows. Strained metaphors (the ballerinas "swirled like fish caught in a current") and the narrator's messages ("being a star wasn't always enough") are less successful than the more infrequent, direct dialogue ("I'm sorry. Terribly clumsy of me.... Love your outfit," T. Rex says to the conductor as she leaps by mistake into the orchestra pit). Demarest, working in the looser style of his pop-up, adds lots of funny details, but his watercolors can be so cluttered that they fail to make the action clear. Some kids will relish that the monster-size skeleton, all of Demarest's comic touches notwithstanding, can't help looking scary as it towers over the crowds, and that the vacant eye sockets look similarly spooky. But those same kids might not be up for a book with a pink jacket or a climax involving 32 "perfect pirouettes" and 16 "dainty cat steps." The dance crowd, conversely, might not go for the dino fantasy. Ages 3-up.