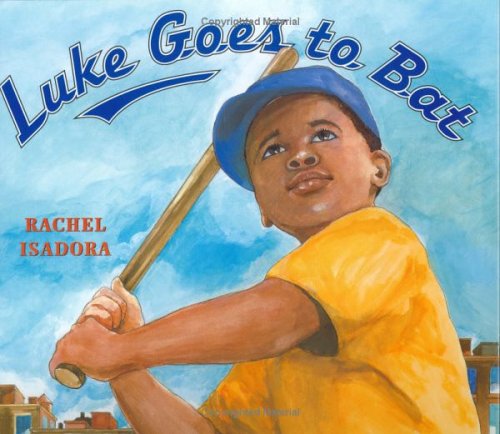 As Isadora's ( ) gentle story opens ("It was Brooklyn. It was summer. It was baseball"), Luke wistfully watches his older brother and friends play ball in the street and later practices swinging and throwing by himself. Sitting on the roof of his building at night, the African-American boy gazes out on the lights of Ebbets Field and pledges that one day he will hit a home run, just as he imagines his favorite player, the Dodgers' Jackie Robinson, doing at that very moment. One day when his brother's team is short a player, the kids begrudgingly let Luke join in their game, and he strikes out. Luckily, Grandma comes up with just the ticket to make him feel better—in fact tickets—to a Dodgers game against the Phillies. At the bottom of the 14th inning, with the score tied (8–8), Robinson steps up to the plate and, after two strikes, hits a walkoff homer. The tale takes a surreal twist when, on the rooftop later that evening, Luke discovers that game-winning ball—and sees Robinson himself, who counsels Luke to never give up. A closing illustration of the lad connecting with a ball during a street game makes a fitting finale to this inspiring tale, likely to score points with any kid who has experienced an on-the-field disappointment—and a dream. Though they convincingly convey the story's baseball action, Isadora's spare paintings are most memorable for their portrayal of Luke's changeable, strong emotions. Ages 4-up.