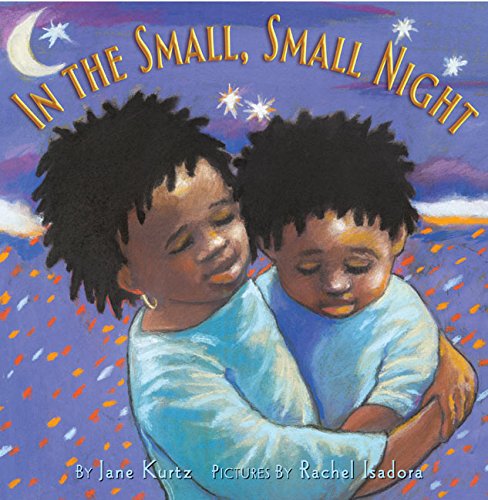 IN THE SMALL, SMALL NIGHT

In Kurtz's ( ) reassuring bedtime tale, a girl puts her younger brother at ease in a strange place with stories from their homeland. It's their family's first night in America after emigrating from Ghana, and Abena's little brother, Kofi, won't let her sleep. To reassure Kofi and to regain her own sense of confidence, Abena tells two stories, one about Anansi, the other an Aesop-like fable. With each one, Isadora ( ) shifts the setting from Abena's bedroom, bathed in the deep blue and lavender hues of night, to sunbaked landscapes of West Africa. The first story finds the trickster Anansi with worries of his own, which he tries to assuage by hoarding the world's wisdom in a pot; in the second, a determined turtle proves that no obstacle is too great when a friend is in need. Kurtz beautifully captures the way an age-old oral tradition emerges in the lilting, playful cadences of Abena's voice. "Don't worry," she says, when Kofi asks whether Anansi is going to play a trick on them. "If he is, we're ready. I'm very tricky, myself." But what really shines through, thanks to Isadora's velvety pastels, is the us-against-the-world bond between the siblings. Their physical ease with one another, and the warmth that passes back and forth between their dark eyes, make the old cliché ring true: home is where the heart is. Ages 5-up.