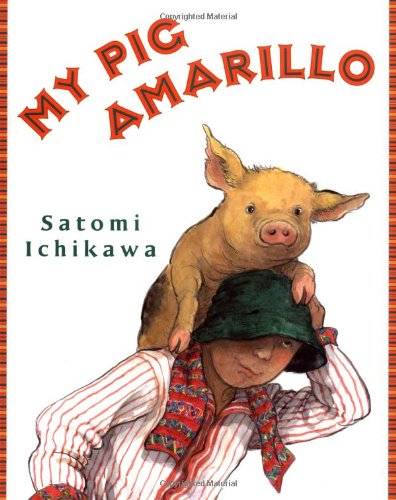 Pablito, a Guatemalan boy, is devastated when his beloved pet pig, Amarillo, disappears. "Where are you, Amarillo? Where did you go? And why did you leave?" Pablito cries into his pillow. A few days later, his grandfather gently advises him that Amarillo may have had an accident and died; if so, says the man, "he is in peace with angels in the sky. He must be happy up there." Grandpa reminds Pablito what people "here" do when they miss those who have died: "We send them a message in the sky.... We fly kites on All Saints' Day. That's how we send them messages." Affectingly conveying Pablito's grief, Ichikawa's () watercolors also balance the vibrant hues and patterns of the characters' clothing with the muted tones of the mountainous Guatemalan landscape. Pablito's environment brims with intriguing elements, from the loom where his mother and sister weave striped cloth to the colorful bus that his father drives (among the bundles on top of the bus sits a male passenger) to the family's old-fashioned kitchen. The ending delivers the "message in the sky" that the boy needs in order to find closure. On All Saint's Day, Pablito releases his kite into the clouds, which reshape themselves to form a detailed picture of Amarillo's face. The lack of ambiguity in the image in the clouds may be a stretch for some readers, but those who have experienced a grief similar to Pablito's will likely find the image reassuring. Ages 4-8.