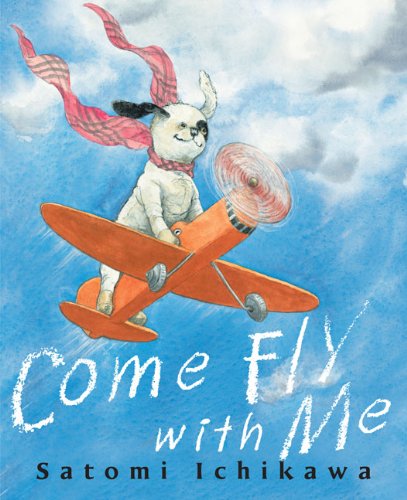 Come Fly with Me

Ichikawa’s ( ) watercolors treat readers to splendid views out the artist’s window in Montmartre and up the hill toward the “White Dome” (the Sacré-Coeur Basilica, named only on the flap copy). Yet it is not Ichikawa’s perspective that readers share, but that of two toys, a wooden propeller plane and a stuffed dog who are best friends. Cosmos, the plane, announces that he wants to go “Somewhere” and invites Woggy to come along. After admiring a sumptuously shaded Montmartre skyline dominated by the wedding-cake-like Sacré-Coeur, the two fly through the quaint streets, attracting attention from passersby as well as people (and animals) behind picturesquely framed windows. In several spreads the text is arranged to mimic Cosmos’s sometimes circular flight path, an old trick that nevertheless works to great effect, in part because rotations of the page reveal Woggy’s expression. A chase scene involving a “cloud monster” adds suspense, then resolves in an invitingly scaled and detailed spread of the two friends perched on one of the cathedral’s gargoyles and gazing at a rainbow that arches over the sprawling city below. Ichikawa successfully navigates the thin line between sweet and treacly, soothing young readers about their fears of traveling as she reminds them of the excitement and pleasures to be had. Ages 4-up.