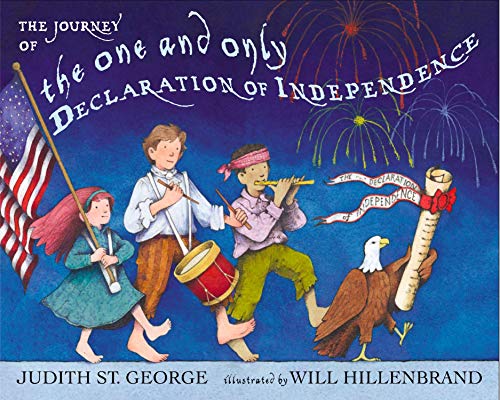 The Journey of the One and Only Declaration of Independence

St. George ( ) offers readers another engaging foray into U.S. history as she chronicles the journey of one of the nation's most hallowed documents. "The Declaration of Independence has had more homes than a traveling circus." Though lengthy and far-reaching in scope, the account moves swiftly, thanks to a conversational style and a sprinkling of interesting, little-known facts. Readers follow the document from its creation ("Every S looked like an F, but since that was the way people wrote back then, nobody minded") to the many times it was spirited off to secret locales during wartime (e.g., Fort Knox during WWII) to the argument over its ultimate home in Washington D.C. An often tongue-in-cheek tone (a running joke reiterates that "parchment should never be folded") and humorous, parenthetical asides ensure the story's accessibility. Hillenbrand's ( ) mixed-media artwork fluidly captures a variety of moods, from innocent-looking children to important historical figures, contributing mightily to this entertaining history lesson. One spread depicts elder statesmen—their monogrammed britches denote which of the original 13 states they represent—comically duking it out to highlight the nascent nation's infighting. But the artist also does not shy away from grave moments: a Civil War scene depicts a soldier reeling from a wound to the chest, near a heap of abstractly outlined bodies. History buffs or not, all readers will come away better informed about this honored 2'×21/2' sheet of parchment. Ages 5-up.