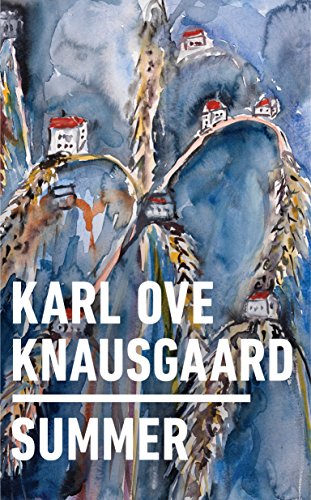 The sights, sounds, and family activities of a Norwegian summer spark Knausgaard’s imagination in this expansive, engrossing meditation on everything, the final volume of a series loosely inspired by the seasons. Norwegian novelist Knausgaard (My Struggle) offers 54 short essays about deceptively mundane topics, from lawn sprinklers and cats to ice cream, bicycles, and “repetition,” each one opening out from naturalistic observation or scientific lore into grand metaphor. “Ice Cubes,” for instance, begins with the “rustling or clinking sound when the glass they are floating around in is moved,” and concludes that “motion and heat cannot be preserved, only reborn, only projected ever further, which gives life its hysterical and manic aspect.” Interspersed throughout are diary entries that recount domestic minutiae—the weather, landscapes, shopping, barbecuing, and the constant chauffeuring of kids—before expanding into ruminations on, among other things, Swedish mystic Emanuel Swedenborg, the difference in perspective between adults and children, and a narrative about a Norwegian woman falling in love with a German officer during WWII. Knausgaard’s writing is rambling, pensive, and neurotic—he’s ashamed of his narcissism, and of being ashamed of his narcissism—but also ruthlessly frank about himself and endlessly curious about the world. Always intriguing despite its seemingly banal subject, Knausgaard’s prose evokes universal themes from intimate specifics. [em](Aug.) [/em]
close
Details