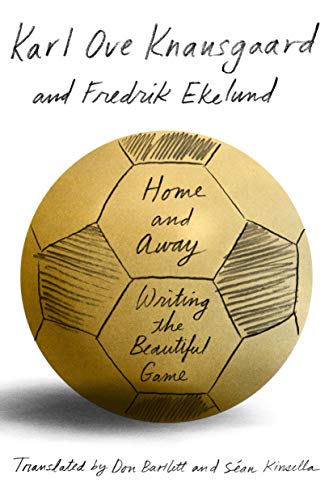 Home and Away: Writing the Beautiful Game

Friends since meeting in a casual soccer game, novelist, poet, and translator Ekelund (Malmo Dockers, Report!) and bestselling novelist Knausgaard (My Struggle) have very different opinions about how the beautiful game should be played. Knausgaard believes in “Protestant football,” where “efficiency, graft, pain, and suffering” win games. Ekelund prefers the “Dionysian” jogo bonito style of Brazil. In this fantastic book of correspondence covering the 2014 World Cup in Rio de Janeiro, the two writers send reports back and forth (sometimes several times a day) analyzing and contextualizing the ups and downs of the sensational tournament, but also spinning off on tangents about the events of their daily lives, the state of global politics, and the relationship between writing and soccer; nothing is off the table in their free-wheeling, deeply personal letters.

Knausgaard watches the tournament on TV from Sweden between speaking commitments and trips to the beach with his four children. Ekelund is on the scene in Rio, taking the pulse of his Brazilian friends, exploring the streets, and playing the odd game of pick-up. Although soccer fans will get the most out of these lengthy discussions on players and tactics, readers with just a passing interest in the sport will be enlightened by their thorough exploration of how soccer has evolved over the years. And with Knausgaard and Ekelund situating themselves on opposite poles of soccer philosophy—“life-denying,” negative soccer versus the energetic, positive jogo bonito—tension builds as the tournament moves through its most dramatic moments: Van Persie’s flying header, the Suarez bite, Brazil’s 7–1 humiliation at the hands of the Germans. Thirsting for life but feeling he has “missed the bus” on becoming a bon vivant, Knausgaard relishes the physical, tactical games in which neither team is willing to give an inch. Ekelund would rather see an open game, ebbing and flowing in its pace and pressure.

Filled with exquisite, solemn passages about the stark Scandinavian landscape and the quiet life of caring for children, Knausgaard’s letters are the weightier of the two, constantly bringing the conversation back to geopolitical and metaphysical questions—the state of the individual in modern society, the dissolution of the collective, the nature of memory. Ekelund is quick to provide the antidote, with tales of working-class people on the outskirts of Rio, conversations with bartenders and metal workers about the recent surge of middle-class wealth. “Once again,” Knausgaard writes, “I felt hot cheeks of shame because when you describe your world it is as if you are correcting mine.”

As the book progresses, readers can see Knausgaard and Ekelund learning from each other, realizing new desires and prejudices, reevaluating former positions, repositioning themselves. The discourse is so open, so productive and thoughtful, that when readers reach the final letter, from Ekelund, sadness takes over; we can’t read Knausgaard’s reply. Hopefully they’ll still be corresponding in 2018. (Jan.)