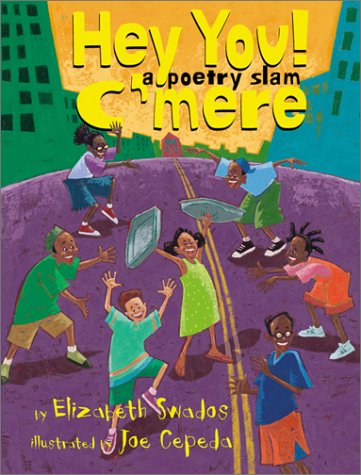 HEY YOU! C'MERE: A Poetry Slam

Everyone's a poet, according to this exhortative poetry-reading and street-theater combo: "You've got a poem in your pocket,/ A poem on your tongue, did you know that?/ You can be the poet and you can be the poem too./ Yesssss!" To prove it, seven young poets roam their city block on a summer day, using ordinary situations as material for syncopated storytelling. The players' portraits and names appear in the table of contents, so that each one is identifiable during their improv. Ratchit, a bold prankster, repeats a tough kid's threat ("Hey you, c'mere,/ Whatsa matter witcha"), while his friend Jacob describes a timid reaction to bullying in "A Good Cry." Mattie mimics her mother's phone voice—"Yeah, uh huh, uh huh"—in a song. While Doria creates a nonsense riff on "Silly Names" (""), Ratchit sneaks off to play a joke on the group; after his ghostly noises inspire his friends' frightened poem, "Monsters," Ratchit laughs, then composes a reiterative "Sorry." Swados, author of the musical play , crafts an upbeat series of poems and dramatic asides. Using a crackling-hot palette of orange, summer green and blue-violet, Cepeda () limns a vibrant cityscape and brings out the strong personalities of the multiracial group. The slangy words and upbeat visuals suggest that poetry happens in casual conversation and friendship; readers might want to try this "slam" as a real play or spin some verse of their own. Ages 6-12.