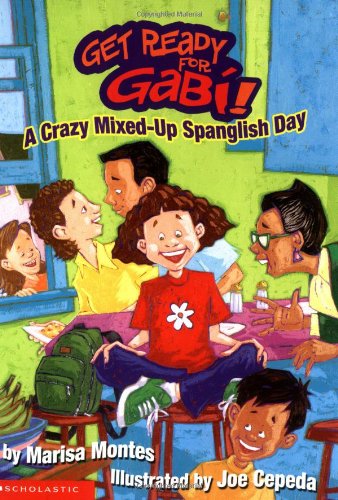 Launching the Get Ready for Gabí! series, this slim tale introduces Maritza Gabriela Morales Mercado, a third-grader who speaks Spanish at home and English at school. "At home, I'm Gabi. At school, I'm Maritza Morales." Yet she tends to confuse her identities—and mix up the two languages—when she gets "super-stressed." One of Montes's more successful scenes centers on the narrator's playground conversation with her "Little Buddy," a kindergartner who recently moved to California from Nicaragua, and Devin, one of her best friends, who lived in Panama for four years (in Maritza's words, Devin "speaks really good Spanish, and she doesn't want to forget it"). Their exchange allows for a sprinkling of Spanish words, but the author never develops these relationships much beyond that early playground scene. Aside from a surprise visit from Maritza's grandmother (who lives in Puerto Rico), the action primarily focuses on the heroine's attempts to control her temper. Her nemesis, Johnny, a classmate who calls her "Maritza Pizza," teases her relentlessly. As a solution, the girl announces to the class that she prefers to be called Gabí (with an accent—so it will rhyme with Blabby, the nickname with which Johnny promptly saddles her). Cepeda's () b&w line art adds little to the sketchy proceedings. Ages 7-10.