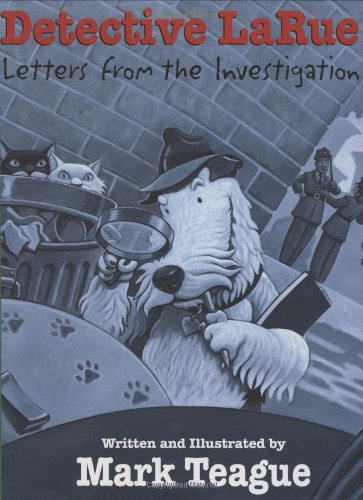 DETECTIVE LARUE: Letters from the Investigation

Last seen heroically saving his owner, Mrs. LaRue, obedience school dropout and creative letter writer Ike returns for another canine caper in this snappy follow-up. This time out, the pooch fond of putting pen to paper is suspected of complicity in the disappearance of Mrs. Hibbins's cats (who happen to be Ike's longtime nemeses). Just as the cats go missing, so do several canaries and other birds from local pet stores. Coincidence? Ike thinks not. Feeling wrongly accused and unfairly detained by police, Ike escapes custody and investigates the Hibbins mystery himself. All the while he keeps Mrs. LaRue, who is on a European vacation, apprised of his progress in letters worthy of a pup with a penchant for melodrama: "An unfortunate misunderstanding (as well as very sloppy police work) has landed me in jail," he writes. Teague once again lets readers in on the fun—viewing the action both as it happens (in full-color scenes) and as embellished in Ike's imagination (featured in black-and-white). For example, the postscript "P.S. Imagine how I feel cooped up inside this loathsome dungeon!" accompanies a color illustration of Ike and a police officer playing a hand of cards in a sunny room, as well as a black-and-white image of Ike being innocently duped by the cats. Lively acrylics paired with comical correspondence result in a picture book that will have Ike fans howling. Ages 4-8.