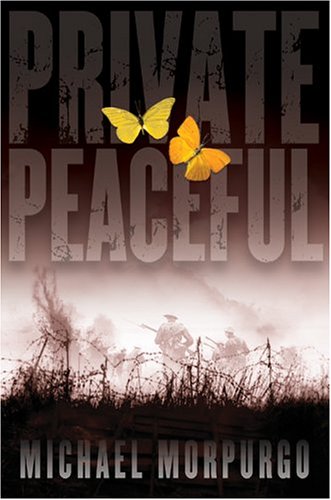 Morpurgo's ( ) suspenseful, ultimately tragic novel opens as 18-year-old Tommo Peaceful stays up all night "to try to remember everything." The author plants clues as to the narrator's sense of urgency with a framing structure: each chapter begins with Tommo's thoughts in the present, then flashes back to a memory. The novel divides into two parts: Tommo and his brother Charlie's lives before they enlist in WWI and during it. Before the war, their lives in rural England seem almost idyllic—except for Tommo's "terrible secret" (their forester father is killed by a falling tree when he pushes Tommo from its path). Their loving, closeknit family includes a retarded older brother and sweet Molly, a schoolmate whom Tommo and Charlie both love (and who winds up married to Charlie). Tommo recalls how his brother constantly looked after him, and readers observe Charlie's stalwart sense of loyalty and his refusal to bend to authority. How these qualities in Charlie manifest themselves, both before and during the war, play out dramatically yet realistically in both brothers' lives. On the frontlines in France, Tommo recounts the horrors of war: hellish conditions, friends killed and a cruel sergeant who hates Charlie. Readers will come away with a clear picture of a very different era. This is a moving depiction of a loving relationship between two brothers, their lives so linked that readers may wonder until the end whose fate lies in the balance. All in all, a powerful story about war's costs, and who pays the price. Ages 12-up.