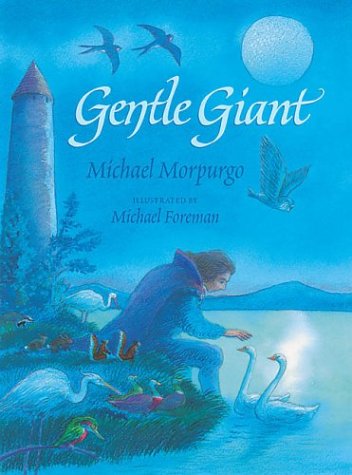 In a disappointing effort, a distinguished British team turns out a plodding tale about a misunderstood, almost mute giant who saves the town and gets the girl. The cruel villagers call the giant the "Beastman of Ballyloch," even after he saves the lovely Miranda from drowning. But when a stranger talks the villagers into buying his magic stardust to sprinkle on the lake and it becomes covered in green slime, the giant enlists Miranda's help. Consistent with the rest of the dialogue, Miranda's exchange with the villagers is terse: "Do you want to save our beautiful silver lake?" she asks them. "And all our wild creatures?" Like vaudeville shills, the villagers immediately cry, "Yes!" Foreman's illustrations are suitably idyllic, although the lake, invariably described as "silver," is always blue in the artwork. Both art and text contribute to a sappy ending. While the giant murmurs the name of his sweetheart (he leaves out one syllable, saying "You are my Manda.... My Manda"), two swans curve their necks to form a picture-frame heart around them. The clear messages about tolerating individuality and safeguarding the environment notwithstanding, the stock characters and clichés add up to a story that, even by fairy tale standards, is hard to believe. Ages 4-8.