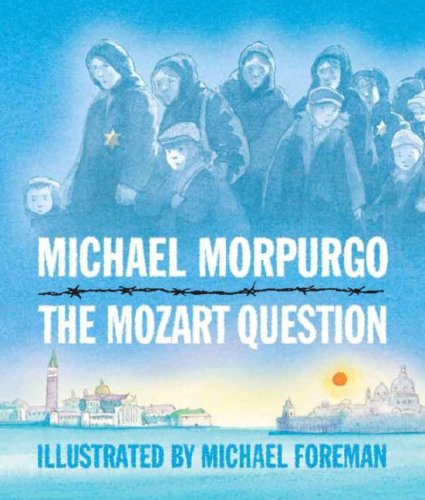 A distinguished British pair brings on the violins for this sentimental story built atop the Holocaust. A young journalist is to interview world-famous but idiosyncratic violinist Paolo Levi, and all she knows is not to ask “the Mozart question”—but not what, exactly, that question is. When she artlessly mentions this to him, the book turns into a sequence of flashbacks involving a Venice boyhood of stealing outside in the moonlight to hear a street musician, who later secretly teaches Paolo to play the violin. Eventually the musician meets Paolo's parents, only to discover that the three already know one another from their incarceration in a WWII camp, where all three were made to play in a camp orchestra and where Paolo's parents were known as “the lovebirds.” Scarred, Paolo's father has since forsworn music and asks Paolo never to perform the Germans' favorite composer, Mozart, in public. Foreman obliges this text with nostalgic scenes of canals, quaintly dressed gondoliers, women and children carrying baguettes; his appropriately subdued watercolors of the death camp depict structures like those at Auschwitz. The story's foundation, unfortunately, is flawed: men and women prisoners did not mix in concentration camps, and orchestras were not exceptions. Why ask readers to honor history (much less a history that undergoes very public challenges) if the author reinvents the record? Ages 8-12.