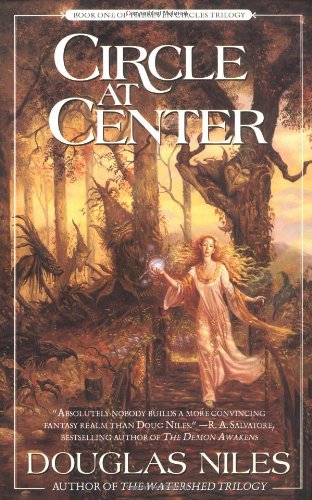 Niles follows up his popular Watershed fantasy trilogy with this first book in a new trilogy. The standard fantasy-world denizens--dwarfs, goblins, trolls, etc.--dwell peaceably, each to its own Circle niche in the Seven Circles, and are benevolently ruled by the elves of Nayve, the city in the Circle at Center, seat of the great College and the Senate, home of the mystical Grove and of the druids and enchantresses who serve the one true Goddess. This peace is shattered, however, when the keeper of the Stone of Command is murdered and the Stone stolen. Then Zystyl, an evil Delver Dwarf, leads a rebellion against the good Seer Dwarves of the sunless Underworld city of Axial, in the First Circle. In Nayve, Belynda, elven sage-ambassador to the Fourth Circle, learns that a druidess named Mirandel is one of several enchantresses who have been teleporting human warriors from Earth, hoping that the barbaric humans can teach the enchantresses' people how to defend themselves against the evil invaders. Unfortunately one of those warriors is an insane knight from Earth's Crusades, Sir Christopher--and he now holds the Stone of Command and is using it to build an army of Delvers, centaurs and others, leading his own Crusade against the Goddess-worshipers of the Circles. Niles has again conceived a fantasy setting of great richness and scope. Although his characters rely on standard fantasy stereotypes (""noble"" elves, ""gruff"" dwarfs, etc.), and the day is ultimately saved by a deux ex machina, his fans are sure to enjoy this spritely tale. (June)
close
Details