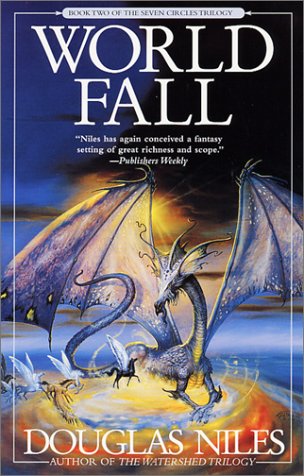 Fans of the first book in this high fantasy trilogy, 2000's , will welcome this sequel, set in the realm of the Seven Circles with its host of mythological creatures—dwarves, elves, griffons, harpies, centaurs, giants, pegasi, dragons, trolls, golems, even angels—who in their exotic variety contrast with the novel's formulaic human characters. One soon picks out the good guys from the bad. As 19th-century vintage airships float in the sky above the city of Nayve, Miradel, a human druidess who has lived many lives, prepares with her warrior husband, Natac, to battle Karlath-Fayd of Loamar, the Fifth Circle, who has created a great rift ("Riven Deep") dividing Nayve. The evil Karlath-Fayd is planning to conquer all the circles with armies of the dead, many from earthly wars. Meanwhile, in an interlude drawn from the American Civil War, a Nayvean woman uses a magical device to observe a Confederate soldier with whom she falls in love. When the soldier is bayoneted, she wafts him, surprised but happy, to her bed. Niles (the Watershed Trilogy) regularly repeats a Yogi Berra–ish metaphor, "the direction that is neither metal nor wood," much as Lord Dunsany used "beyond the fields we know" in . More familiarly, he also tosses in Tolkienian gems of power. A surfeit of action and characters will tire those who prefer more serious, thought-provoking fantasy, but others will be left wondering how it will all turn out in volume three.