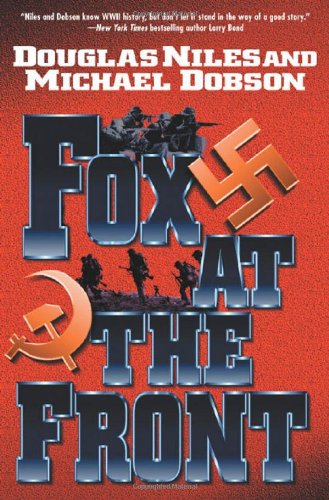 FOX AT THE FRONT

This World War II what-if novel picks up where (an alternate history of the Battle of the Bulge) ended, with a disillusioned Field Marshal Rommel surrendering his armies to the Allies, but continuing operations the Nazis under the tutelage of General Patton's forces. Soon President Roosevelt sees the value of founding a German rump state to help transfer power and reconstruct the country, just as the Allies did in Italy. As the new commander of the German Republican Army, Rommel operates alongside Patton's Third Army, creating a sort of WWII "Dream Team" for war gamers. Imagining how the dignified, sympathetic German commander might have reacted to the full revelation of Nazi atrocities, Niles and Dobson depict Rommel as shaken to the very core by his complicity in Hitler's final solution. The authors' attention to military detail and maneuvers would satisfy any drill instructor, and they imbue even minor historical characters with authenticity and personality, demonstrating how an individual's actions and reactions shape history. This is a thoroughly plausible what-if scenario, and as such will please and titillate alternate history fans, WWII buffs, war gamers and others.