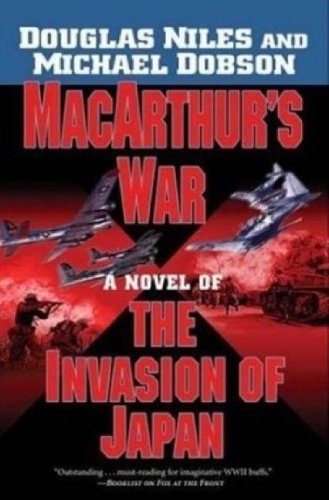 MacArthur's War: A Novel of the Invasion of Japan

Veteran video game designers and coauthors of the World War II alternate histories and , Niles and Dobson reimagine the Pacific Theater in their latest historical novel. With the American navy still smarting from Pearl Harbor and (here's the twist) a crushing defeat at Midway, Gen. Douglas MacArthur secures control of the Pacific theater. After clearing the Solomon Islands—where the authors put MacArthur at the Battle of Bloody Ridge—the campaign moves on to the Philippines, Okinawa and Japan. Following his triumphant return to the Philippines, MacArthur's march to Tokyo turns treacherous. The Japanese launch "mass suicide attacks" on Okinawa—an ominous prelude to an invasion of Honshu. Trouble, meanwhile, besets the Manhattan Project, and perhaps most ominous of all for the egomaniacal MacArthur, President Truman dispatches Gen. George Patton to the Pacific to command MacArthur's armored corps. With one eye on the Japanese and the other on Patton, MacArthur launches the long-anticipated invasion of Japan. Fans of alternative history will enjoy this imaginative but plausible what-if account of World War II in the Pacific.