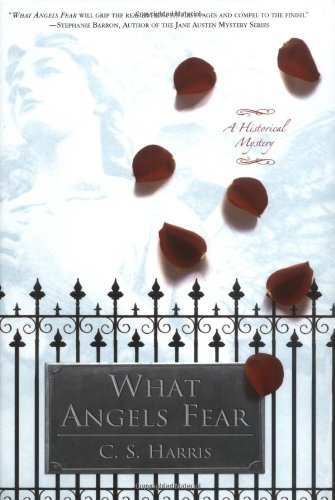 Set in England in 1811, Harris's riveting debut delivers a powerful blend of political intrigue and suspense. When Sebastian Alistair St. Cyr, Viscount Devlin, is accused of the rape and murder of actress Rachel York, mistress to various members of Spencer Perceval's wobbly Tory cabinet, Sebastian goes "on the lam," in the words of young Tom, his adopted companion and faithful servant, and must spend frantic days in clever disguises chasing "across London and back." Uncanny powers of sight and hearing help him to identify several suspects, including Hugh Gordon, Rachel's fellow actor and ex-lover; shadowy French émigré Leo Pierrepoint; and even his own wayward nephew, Bayard Wilcox, who had been stalking the victim for weeks. Also implicated is portrait painter Giorgio Donatelli, for whom Rachel often posed nude, whose current patron, Lord Fairchild, is expected to be the next prime minister. Waiting in the wings to rule over this gathering chaos is dissolute Prince George (aka Prinny), soon to become regent for his incompetent father, George III. Backed by a blurb from Stephanie Barron, this fresh, fast-paced historical is sure to be a hit.