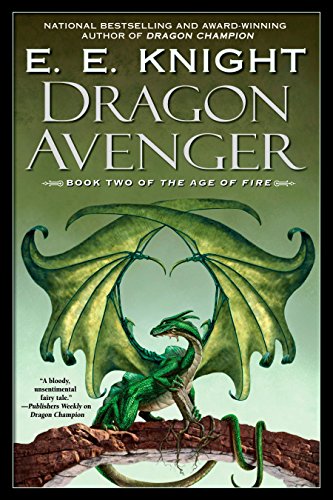 Dragon Avenger: Book Two of the Age of Fire

Knight chronicles the gritty coming-of-age story of the dragon Wistala (sister to Auron, from 2005's ) in the second Age of Fire novel. When her young family is betrayed and decimated by a clan of dwarfs while father AuRel is away, Wistala must carry the awful news north to him. But she finds AuRel badly wounded after running afoul of the very same dwarfs, and before she can nurse him back to health, a hunter called the Dragonblade kills him. Once again, Wistala must run for her life, vowing vengeance, even though she knows a year must pass before she's grown enough to carry out her revenge plan. Befriended by the elf Rainfall of Hypatia, she matures and gains the wisdom to temper her plans. Coming-of-age themes such as personal responsibility and family give the novel a strong YA slant, but Knight makes the story complex enough to entertain readers of all ages.