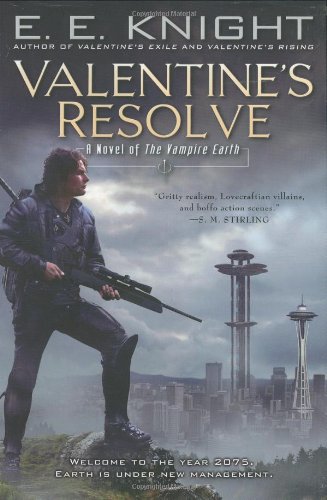 Valentine's Resolve: A Novel of the Vampire Earth

Knight flavors action with humor in this sixth Vampire Earth book (after 2006's ). Some 50 years after the 2022 takeover of Earth by the Kurian Order, crumbling pockets of resistance are being stabbed in the back by Quislings, humans who sympathize with the Kurians, as members of the resistance struggle to fight off the alien Grogs and the vampiric Kurian avatars known as Reapers. The only hope for the Southern Command is resistance hero David Stuart Valentine, who is persuaded to undertake a hazardous journey to Seattle and locate the mystical Lifeweavers, helpful aliens captured by the Kurian. Along the way Valentine's resolve and faith in the movement are tested after learning one guerrilla leader's disturbing plans for Kurian-held Seattle. Classic apocalyptic SF on a grand scale is always scary, but Knight makes it terrifically entertaining as well.