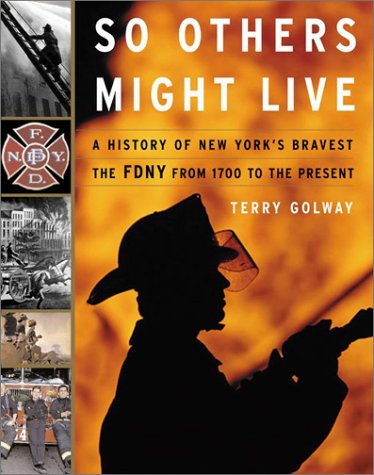 SO OTHERS MIGHT LIVE: A History of New York's Bravest: The FDNY from 1700 to the Present

Writing with humor and passion and an understanding of the firefighter's mindset that comes from deep personal experience (his father, father-in-law, godfather and uncles were all firemen), editor-columnist Golway (, etc.) takes readers inside the New York City Fire Department. As Golway's account follows the FDNY going back to its origins in New Amsterdam, points of familiarity emerge from the fine details: the need, even in 1731, to raise money for state-of-the-art equipment; the "respect and awe" felt by little boys for firefighters; the passion of firefighters for their work; the feverish search to recover the bodies of fallen brothers. Golway also provides vivid portraits of the city's worst conflagrations: the "ocean of fire" that destroyed 674 buildings in lower Manhattan in 1835, the tragic 1904 excursion boat fire that left 1,000 dead, the 1911 Triangle Shirtwaist Fire and the 850 alarms reported on April 20, 1963, "the busiest day in FDNY history." Closing chapters are devoted to the 1993 and 2001 World Trade Center attacks. Centuries of heroism and bravery are documented here, along with profiles of firefighters famed within the organization, and many readers will see this as a compelling volume to shelve alongside Richard Picciotto's , David Halberstam's and former Fire Commissioner Thomas von Essen's forthcoming autobiography, (see review, p. 292). 70 b&w photos.