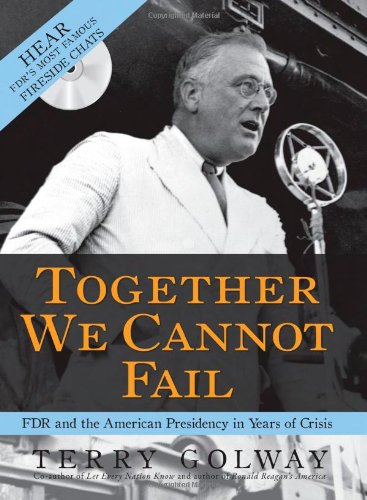 Together We Cannot Fail: How FDR Led the Nation from Darkness to Victory Through Hope, Courage, and an Unwavering Trust in the American People

The United States economy is failing, a war overseas threatens global security, and a president who tells the country “I still believe in ideals” manages to keep hope alive. That president was Franklin Delano Roosevelt. Golway ( ) describes Roosevelt's use of radio airwaves to become not merely a political figure but a beloved and trusted friend, almost “a guest in the homes of everyday Americans.” This is examined with great attention to FDR's rhetorical prowess and illustrated by the accompanying CD, which includes audio clips from some of FDR's most famed speeches and fireside chats. We can hear him telling Americans that isolationism was impossible because the world had shrunk; that despite the Depression “we have nothing to fear but fear itself”; that sometimes we must sacrifice at home for liberty abroad. The book and CD will resonate deeply with those seeking a historical context for today's economic crisis, interested in WWII or merely fascinated by the spoken word's power to inspire hope. Photos.