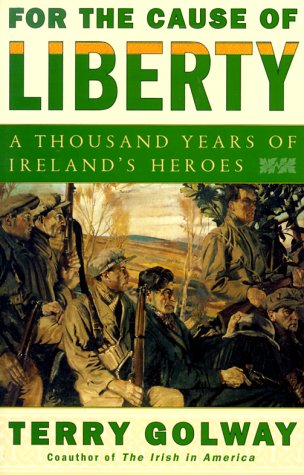 For the Cause of Liberty: A Thousand Years of Ireland's Heroes

Just in time for St. Patrick's Day, Golway, an historian (Irish Rebel: John Devoy and America's Fight for Ireland's Freedom, etc.) and political columnist at the New York Observer, offers an essential short course in Irish history, spanning 1,000 years and encompassing events familiar to every Irish high school student but not well-known outside the Emerald Isle. Golway crafts a dramatic tale, placing various episodes in a broad context that will enlighten an audience familiar with, say, the founding of Ireland's Abbey Theatre but not with the theater's role in Irish revolution. The focus is on the people who risked life and limb in defense of their homeland. Readers will meet the full spectrum of well-known heroes, such as Wolfe Tone, Daniel O'Connel and Michael Collins. They will also be introduced to a bevy of courageous unknowns, including the late 18th century's Father Murphy of Boolavogue, who initially urged rebellious parishioners to disarm but then, when faced with British violence, became a rebel leader, telling his followers it would be better ""to die like men than to be butchered like dogs in the ditches."" Ireland's nationalist heroes include a significant number of women, whose tales are recounted here in admirable terms. Those who are familiar with modern Irish history may question the inclusion of certain persons in this gallery; politician Gerry Adams, for instance, remains a controversial figure, and the former U.S. ambassador to Ireland, Jean Kennedy Smith, may strike some as decidedly unheroic. Yet, on the whole, this is an energetic and deeply informative work whose author makes a strong plea for a new type of heroism dedicated to preserving peace in Ireland. (Mar.)
close
Details