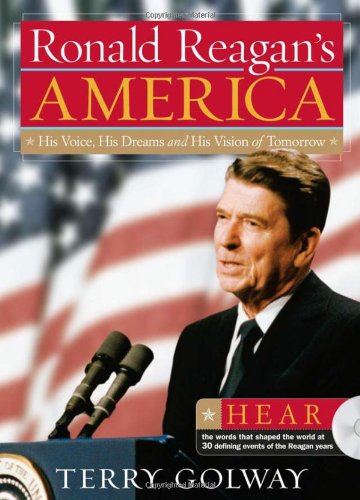 Ronald Reagan's America: His Voice, His Dreams, and His Vision of Tomorrow

Historian Golway ( ) provides incisive print commentary on 29 classic speeches by Ronald Reagan, ranging from a 1964 television address endorsing Republican presidential candidate Barry Goldwater to speeches associated with his governorship of California, his presidential campaigns and, of course, his two terms in the White House. On the accompanying CD, one can hear Reagan's own voice uttering such classic lines as “Are you better off than you were four years ago?” and “Mr. Gorbachev, tear down this wall!” Reagan's words are not, however, included in the text of the book. While Golway's commentaries do a good job of setting the remarks of the “great communicator” in context, the experience of moving from commentary to audio and back again is not always seamless. The judiciously chosen speeches include “greatest hits,” like Reagan's October 1980 debate with Jimmy Carter, Reagan's two inaugural addresses, his remarks concerning the air controllers' strike of 1981 and his 1987 address to the nation on the Supreme Court nomination of conservative Robert Bork. B&w photos.