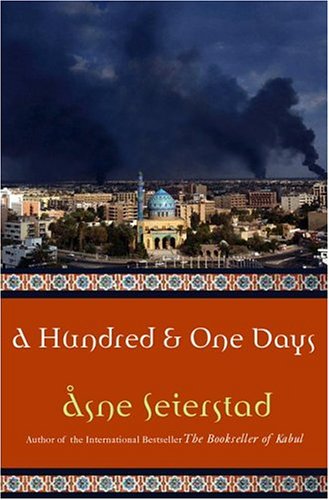 A HUNDRED & ONE DAYS

The author of , Norwegian journalist Seierstad spent 101 days in Baghdad before, during and after the initial coalition attacks in March 2003. She calls the articles she sent back to Europe "glimpses from the war," and weaves them into a brisk, present-tense narrative. The initial battles are with her official minders, always eager to steer her to sanctioned sites. With child psychologists, she sneaks out to explore the muddled terror and fantasy in Iraqi kids. A Finnish "human shield" professes no opinion of Saddam. A missile that hit a market renders scenes of blood and torment "too gruesome to publish." Every American soldier the author meets mentions 9/11, but there is no one Iraqi voice—she finds men joyful and resentful as they watch the fall of Saddam's statue, and finally able to report atrocities they witnessed. One constant is Aliya, Seierstad's interpreter, a loyal regime supporter who heroically shows up during the attacks, works mechanically after liberation to translate regime opponents' words and finally comes to some understanding of her country's past. While more ambitious narratives may provide more context, this is a valuable impressionistic portrait; it may lack the concentrated intimacy of , but should backlist well as part of the tapestry of Iraq coverage.