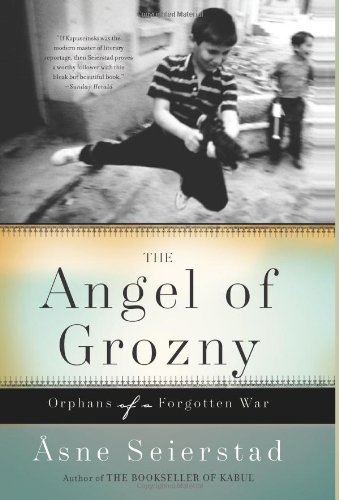 The Angel of Grozny: Orphans of a Forgotten War

In this searing journey through a traumatized Chechnya, two children orphaned by the civil war—Timur, a violent street urchin, and his sister Liana, a waif molested by her uncle who becomes a kleptomaniac—symbolize their country's agony, abandonment and lingering dysfunctions. Norwegian journalist Seierstad ( ) includes them in a gallery of portraits drawn from her reporting—sometimes undercover—from the region. These include a kindly childless woman who runs Grozny's last orphanage; a Russian soldier suffering from brain damage caused by a rebel mine; survivors of Stalin's expulsion of the Chechens to Kazakhstan in WWII; and a family whose daughter joined an Islamist sect and died in the spectacular terrorist takeover of a Moscow theater. Even more disturbing is her chilling, absurdist depiction of the regime of Moscow-backed Chechen president Ramzan Kadyrov, which combines torture and disappearances with a saccharine cult of personality. (One of Kadyrov's youth groups distributed roses on his behalf to every woman in Grozny.) There are many victims but few heroes; the author finds chauvinism and Islamist misogyny to be among the reliable reflexes of the dispossessed in this wounded society. Seierstad's vivid, unsparing reportage makes this distant tragedy very personal.