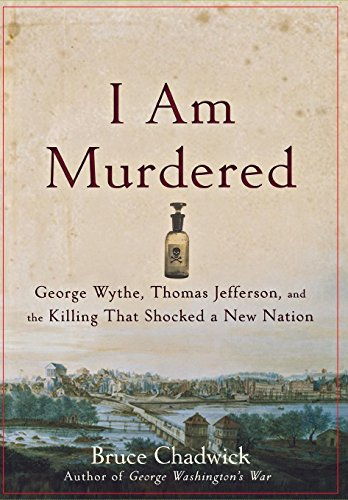 I Am Murdered: George Wythe, Thomas Jefferson, and the Killing That Shocked a New Nation

This historical whodunit relates the tale of the 1806 murder of one of the early nation's most celebrated jurists and public figures. Virginia's George Wythe was a signer of the Declaration of Independence and of the Constitution. He was also teacher and friend to George Washington, Thomas Jefferson, James Madison, John Marshall and Henry Clay. Few were as beloved and admired; the advice of no other was so sought after. But one day in 1806, he and two of his servants were poisoned. Historian Chadwick ( ) takes readers through the circumstances of Wythe's murder and gradually reveals—no surprise to the attentive reader—the murder suspect. It's a good story, well told, of a sliver of life in Richmond, a small, elite-driven capital city in the young nation's most influential state. The walk-on figures include a good proportion of the early republic's leading men. If Chadwick pads the book with too much on, say, arsenic poisoning, as well as the contemporary practices of autopsies, it's all pertinent to the tale's outcome: the acquittal of the likely murderer. Illus.