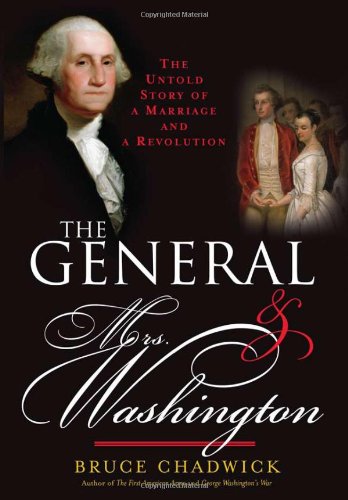 The General and Mrs. Washington: The Untold Story of a Marriage and a Revolution

When Martha Custis married George Washington in 1759, according to Chadwick, she was a fat and amiable widow seeking a loving companion, a father for her children and a manager for her sizable plantations. Their union also met the needs of the dashing, social-climbing and rotten-toothed military hero: he became one of the wealthiest men in Virginia, inherited a ready-made family and quashed a fruitless infatuation with his best friend's wife. As Chadwick ( ) explains in this lackluster dual biography, Martha was a traditional, dutiful wife whose life in a patriarchal society revolved around her husband and children as she supervised a staff of slaves who prepared meals, tended gardens and produced clothing. As the Revolution approached, Martha saw her role as supportive wife of a political figure. She joined George at Valley Forge during the cruel winter of 1777–1778, and her simple helpfulness, such as organizing sewing circles to clothe soldiers, made her a beloved role model. As the president's wife, Martha befriended all and sundry and had Washington's ear. Although competently researched, Chadwick's latest effort is amateurishly written and lacking in provocative insights. Readers will do better with Patricia Brady's splendid recent bio of the first First Lady.