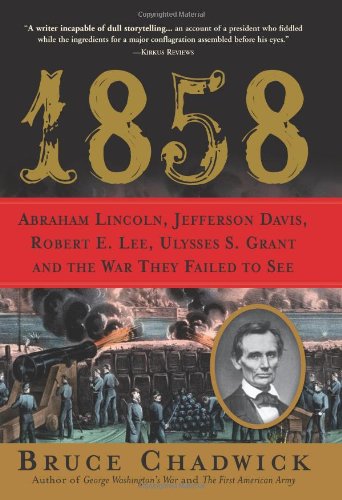 Former journalist Chadwick ( ) deals with much more than the previously underappreciated year of 1858 in this engagingly written book. By focusing on the men who drove crucial historical events, Chadwick provides plenty of pre-1858 background to make his case that the events of that year “changed the lives of dozens of important people” and “within a few short years, the history of the nation.” Chadwick examines the lives of six who would become the biggest players in the Civil War: Lincoln, Davis, Sherman, Lee, Grant and William Seward, and two others—John Brown and Stephen Douglas—whose actions helped precipitate the conflict. He also offers an insightful look at the enigmatic, eccentric man who was in the White House in 1858, Democrat James Buchanan of Pennsylvania. Chadwick shows clearly how Buchanan dithered—on the slavery issue and in foolish foreign adventures in Paraguay, Mexico and Cuba, among other things—while Rome was about to burn. Buchanan, Chadwick correctly notes, “was certainly not the sole cause of the Civil War,” just “one of many, but his ineffectiveness as chief executive dealt a crippling blow to the nation.”